We believe ST PATRICKS PARISH exists to promote THE KINGDOM OF GOD revealed in THE TRINITARIAN RELATIONSHIP OF THE DIVINITY in which we participate by adoption through BAPTISM and are sustained through GRACE and THE SACRAMENTS.

We live our Mission by promoting our Trinitarian life in the following ways:

CHOIR AND MUSIC GROUP  (1) The Music Group rehearse fortnightly on Sundays from 7–8pm.  New members most welcome. The next rehearsal is on the 3rd of October. (2) The Choir rehearses fortnightly on Thursdays from 7.30pm to 9.30 pm. New singers always welcome. Next Rehearsal will be on 30th September.

DEVOTIONS AND BENEDICTION Each Saturday evening from 6.00pm – 6.30pm there is a half hour service of Devotions in front of The Blessed Sacrament. The service includes the reciting of the Rosary and concludes with Benediction. This service is livestreamed.

NEW MINISTERS Bishop Declan has appointed Stewart Fraser, Maggie Fraser and Jeffin Jose as Extraordinary Ministers of The Eucharist. We thank them for accepting this role in our church.

POLISH MASS The next Polish Mass will be celebrated on Sunday 10th October at 12 noon. It was good to see 70 people at the Polish Mass this month.

GROUP MASSES Father Henry has been celebrating Masses for families, groups of families and parishioners during his summer visit. Eight Masses have been celebrated with two more booked. If a group of families would like to come together to celebrate Mass with Father Henry before his return to Poland in mid-October please contact the parish office.

WATCHING MASS FROM HOME You can continue to join our live streamed Mass each weekday, Saturdays at 9am and Sundays at 10.00am by going to: www.facebook.com/stpatricksbristol or you can now also tune in on You Tube at: www.youtube.com/c/StPatricksCatholicChurch/featured. All Masses are live streamed EXCEPT 8.30am on Sunday.

INDIVIDUAL CONFESSION About 100 people have been to individual confession to Father Henry so far during his summer visit. He is available for confession before and after all Masses and by appointment.

COME AND SEE GROUP Today, the Come and See Group will meet at 3pm in the Presbytery. It is wonderful to have the group back up and running and we wish them a productive first meeting since the pandemic. The group meet to reflect on vocations.

ST PATRICK’S WOMENS GROUP The next meeting of the Women’s Group will take place in The Shore Gallery on Wednesday 6th October at 7.30pm. This is the first actual meeting since March 2020. The Group is delighted to welcome Jasper Thompson from “Help Bristol’s Homeless”. Jasper was due to visit last year but like everything his visit was cancelled. This man is now quite famous for converting Storage Containers into homes in Bristol and has helped several homeless people. Visitors most welcome to come along and hear Jasper’s story and be updated on his project. New members from 18 to 100 always welcome to join. The annual subscription is £25 a year and there is no monthly fee. A raffle is held at each meeting. If you would like to join just turn up!

We have several numbers needing a new home.  It costs £1 a week to be a member, payable monthly, quarterly, six monthly or annually.
If you would like to become a member of The 300 Club please contact the parish office.

TEA AND COFFEE Tea and coffee is served after 8:30am and 10:00am Sunday Mass. Please go downstairs to The Shore Gallery to meet and get to know other parishioners. There is no charge but we appreciate a donation. The women’s group are on duty today.

CANON DESMOND MILLET Please remember Canon Desmond Millet in your prayers who has passed away in his sleep on the night of 18th September. May Canon Millet rest in peace.

LEGION OF MARY The Legion of Mary will resume meetings tomorrow, Monday 20th September at 7.00pm. New members most welcome.

VOLUNTEER LIVESTREAM OPERATORS We have had a great response to our appeal for volunteers to be trained in live streaming services.
Amelia Dunford, Jobin Varghese, Jismon Jose, Roy Joseph, Stewart Fraser, Terry Coggins, Sister Leena Mary, Jeffin Jose and Tracy McNama have all been trained in the last two weeks. We now have a full rota. Thank you to all our volunteers.

PARISH INCOME: THE OFFERTORY COLLECTION is taken during both 8:30am and 10:00am Sunday Masses. The Second collection is taken as you leave church. Please give generously.

ONLINE PAYMENT You can also continue to donate by visiting our Dona donate page at:http://stpatricksbristol.mydona.com/

OFFERTORY COLLECTION COUNTERS   The Collection Counters will be re-instated from first week of October.  We welcome new Counters.  If you feel you can make this commitment for approximately 1 hour on (a)  Sunday after 10am Mass or (b) Sunday afternoon around 4pm or 5pm once a month please contact Fiona Bradley on f.bradley@cliftondiocese.com

CHARITY SHOP The shop is now able to take donations of good quality clean clothes, household items, books and toys. The shop has a good stock of new religious items, rosary beads, Holy Pictures, Medals, cards etc etc. The opening hours are 10 am to 4.00pm Monday to Friday and 10am to 2.00 pm Saturday.   Volunteers always needed.  Please volunteer if you have some time to spare which can be a morning shift 10 am to 1 pm or afternoon 1 pm to 4.00 pm. Contact the shop direct by phoning 0117 955 8001 and speak to our Manageress Andriena Smith.

NEW CHURCH NOTICE BOARD Thank you to Robert Rhodes who installed our new church notice board outside the Charity Shop next to the NatWest Cash machine on Church Road. This secure advertising space allows us to take our church information and activities onto the High Street. 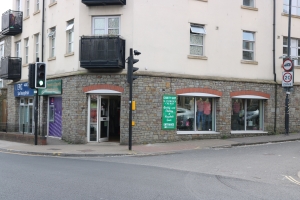 FATHER JEROME’S MISSION  Each quarter we send Father Jerome £1000 to help with his parish mission in Nigeria. We will be doing this next week. Father Jerome and his parishioners are always appreciative of our gift.

CHILDRENS LITURGY  The Children’s Liturgy at 10am Mass has now resumed in The Shore Gallery. Children aged 3 to 8 are welcome to go downstairs for their lesson during Mass.

GOOD NEWS One of our parishioners Rebecca Musarurwa has been selected for training as an R.E Inspector for Catholic Schools. We wish her all the best.

MOSAICS  Our two Polish artists from Krakow are doing a brilliant job installing the new mosaics. The large external panel facing the school field depicting Jesus blessing the children is complete. It looks beautiful. This panel will be illuminated at night. Work continues on four new panels inside the church. Thank you to all our sponsors of these beautiful new additions to our church.

This site uses cookies. By continuing to browse the site, you are agreeing to our use of cookies.

We may request cookies to be set on your device. We use cookies to let us know when you visit our websites, how you interact with us, to enrich your user experience, and to customize your relationship with our website.

Click on the different category headings to find out more. You can also change some of your preferences. Note that blocking some types of cookies may impact your experience on our websites and the services we are able to offer.

These cookies are strictly necessary to provide you with services available through our website and to use some of its features.

Because these cookies are strictly necessary to deliver the website, refuseing them will have impact how our site functions. You always can block or delete cookies by changing your browser settings and force blocking all cookies on this website. But this will always prompt you to accept/refuse cookies when revisiting our site.

We fully respect if you want to refuse cookies but to avoid asking you again and again kindly allow us to store a cookie for that. You are free to opt out any time or opt in for other cookies to get a better experience. If you refuse cookies we will remove all set cookies in our domain.

We provide you with a list of stored cookies on your computer in our domain so you can check what we stored. Due to security reasons we are not able to show or modify cookies from other domains. You can check these in your browser security settings.

We also use different external services like Google Webfonts, Google Maps, and external Video providers. Since these providers may collect personal data like your IP address we allow you to block them here. Please be aware that this might heavily reduce the functionality and appearance of our site. Changes will take effect once you reload the page.

Please join us for our live streaming: Mass is at 9am Monday, Wednesday, Thursday, Saturday, 7:30pm on a Tuesday, 12-noon on Friday, 8:30am and 10am Sundays. View our services here or on YouTube or Facebook at the scheduled times.